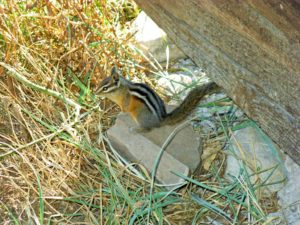 It’s not always about the horses! Fall is approaching Montana, although I wonder where the summer went? The leaves are starting to turn and it was 24 degrees this morning when we woke up! Brrrr. But the days are in the 70’s, perfect riding weather (okay. I said it wasn’t about the horses). As the weather cools down, the mice and chipmunks are getting ready for winter and we’re starting to find them hanging out at the Tack Barn-not desirable. Such is the case yesterday, when I narrowly escaped death. Now I have your attention……

We put out some glue traps in the Tack Barn to try and catch some mice. JT and I took a leisurely stroll down to the barn later that day, and much to my horror, we caught a chipmunk instead. I was mortified. He was still alive and just his little legs were caught in the glue. I told JT that I was going to try and save his life and pick him out of the trap. He told me I was crazy (as he usually does) and the thing would bite me. No way. Not that little creature. They’re so cute and run all around with their little tails up in the air. How could you not love them??

So I proceeded to pick up the trap (glove-less I might add) and took a hoof pick to work the feet out of the trap. I was thinking how much this little guy was going to appreciate me and what a saviour I was. And then… the little xo!!??? chirped a couple of times and wheeled his head around and bit me on the finger! O.M.G. Horror ran through my head. Tetanus? Rabies? Infections??  I might add the bite was two tiny pin points on my pinky finger and I actually had to squeeze the finger to produce one drop of blood. Doesn’t matter. The damage was done. Blood. Doom. Terror.

I rushed to the phone and called my trusted vet and friend, Dr. Shannon Moreaux, who is the Equine Professor at Montana State University. He is keenly aware of my neuroses and manages to always say the right (wrong) thing to evoke fear. Yes, he said, there is the potential that chipmunks carry rabies. Can I find the animal and take it to MSU Diagnostics to evaluate for rabies? Yes, as it was glued to the board in the trash can fighting for it’s life (with no concern that he now jeopardized mine).

Of course the next likely step was to jump on the Internet, as I was sure I was going to find some article, chat or blog that told me chipmunks were highly contagious animals and carried a high risk of rabies. No such investigation. Quite the opposite. For your knowledge from the trusted world wide web: foxes, skunks, raccoons and bats carry a high incidence of rabies. Chipmunks, squirrels, mice, etc carry a low incidence. Good to know. My heart rate slowed down a little, but not much.

Well, I pulled him from the trash (with his one visible eye looking up at me with an angry stare) and took him to the lab. I quickly aborted the thought that I would save his life since it was apparent he could care less about mine. I sheepishly explained the situation to Andy at the Diagnostics Lab. Yes, it’s true, I was trying to save a “wild” chipmunks life. He graciously accepted the now deceased chipmunk and told me he would have the results later today as they were working on “skulls” this morning and he would fit Alvin (my newly appointed name for the dead animal) into his schedule. Thank God, as I didn’t want to have to wait through Labor Day for the results. Now that would be laborious.

While waiting for the results, I called my next trusty confident and fear invoker-my cherished sister Rene’e. Nobody can better help me think of all angles of concerns than my sister. I love that in her. She asked me about my last tetanus shot. I said maybe five years ago, when we traveled to Belize and went snorkeling. A spiny urchin pricked my thumb which immediately turned black and blue. Sheer panic raced through my head as JT and I kayaked back to shore and took a twenty minute boat ride to San Pedro, where the only physician available for evaluation was a gynecologist. Soak the thumb in vinegar she said (a likely treatment plan for any OB/GYN physician) and let me give you a tetanus shot. Are we beginning to see a pattern here?

So back to the ranch. I then went to the Health Department who immediately whisked me into the office and gave me a tetanus (okay, maybe it was just because she had an opening. I took that as Divine Intervention that I needed this shot). Whew. Now I’m covered.

I’m sure the suspense is now killing you. Andy called this afternoon. The “wild” chipmunk is negative for rabies. I’m saved. Back to finishing the last sixteen days of the season 🙂 And yes, the chipmunks are running rampant around the barn. So be it.