Life or death stakes, true love, and a 4-H club…

Sometimes friendship really can save your life.  Just ask Shawn.  He probably won’t answer, because he’s a sheep, but at least it will be amusing for the rest of us watching you talk to an ungulate.

The story of Jack and Shawn really is quite dramatic though, with life or death stakes, shocking twists, true love, and a 4-H club.

Shawn started out as a 4-H lamb, destined to be raised up, shown at the fair, and sold for lamb chops.  His buyer tried to get him into the butcher, but the butcher was full.  A few weeks later, he was again turned away.  Shawn’s life hung by the thread of supply and demand.  Meanwhile, he was making fast friends with a very unusual partner. 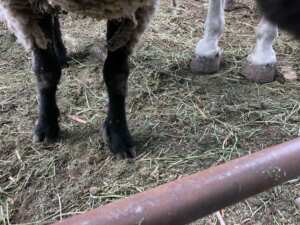 Jack the Horse had recently lost his best horse friend and was feeling blue and lonely until Shawn came along.  In the weeks after Shawn was bought from the 4-H kid, he spent all his time with a 16 hand, 18-year-old, piebald draft-paint cross.  Soon they were inseparable.  That’s when Kurt came along. 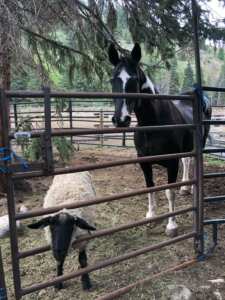 When he heard Shawn and Jack’s story, he knew he couldn’t separate them and allow Shawn to go to the butcher.  So that’s how, after years of refusing to get a goat, he brought a sheep home to the Covered Wagon Ranch. 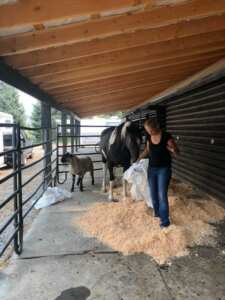 Jack and Shawn safe and sound in their new home

Unfortunately these star-crossed buddies only met more obstacles to their platonic love.  All the horses at the ranch hate Shawn.  He’s a fluffy weirdo.  So sadly at the end of the season, Shawn will have to go away.  To long time guest, Kendra Keating, who happened to buy a house that came with a few pet goats, so what better place for a sheep to go!  Don’t worry, Shawn’s still safe, even if his unusual friendship is coming to an end. 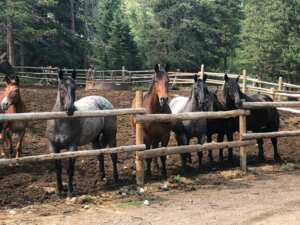 The herd looking very suspicious of this walking cotton ball 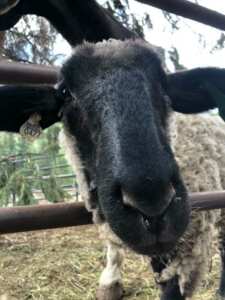 but a very cute cotton ball

One Response to “Life or death stakes, true love, and a 4-H club…” You can leave a response.