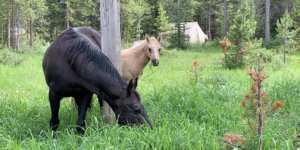 If you take it slow and easy, you might just get a chance to meet the newest member of the CWR herd, Guy.  He’s shy, but cute as a bug and getting friendlier every day.  His favorite pastimes include prancing and bucking in the grass, taking long naps, hiding behind his mom Ojos, and playing with his best friend Freddy. 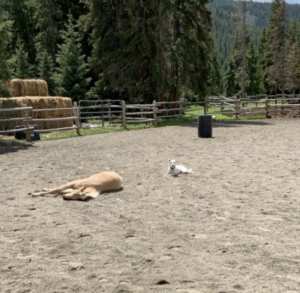 Little Guy has big shoes to fill though.  As the grandson of Frenchman’s Guy and Mr Jess Perry, he comes from a proud line of high-performance horses.  Guy’s great-grand-sire, sorrel Quarter Horse Mr Jess Perry, earned his keep as a champion race-horse and a prolific stallion.

Guy’s grand-sire Frenchman’s Guy also started as just a cute little “Guy”, born in 1987 and raised by the Myers in South Dakota.  He lost one of his eyes in an accident as a colt, but still become a grand champion barrel and rodeo athlete.  Frenchman’s Guy later became such a popular sire, with more than 1000 foals, that the Myers cloned him to keep his genes alive! 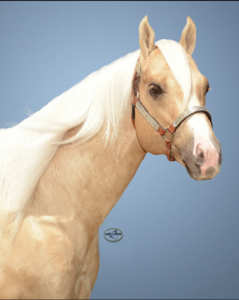 Never far from his side, Guy’s mama Ojos doesn’t let much faze her.  But like her colt’s male relatives, she’s had plenty of experience working under pressure, a quality she inherited from her famous grand-sire, Poco Bueno.  A black Quarter Horse, Ojos spent her younger days working cattle for Sitz Angus Ranch, where she raised her first foal Nikita.  She overcame several injuries before joining the CWR herd.  Now she’s happy as broodmare.  If you see her with her ears back, don’t be alarmed; that’s just an old habit from her cattle days.

Kurt and Melissa plan on starting him as a two year old in hopes of him being ready for Futurities his four year old year and ending as a finished performance horse. Depending on his disposition, confirmation and what the future holds he may be kept a stud, but for now, he’s busy just being a cute stud colt! 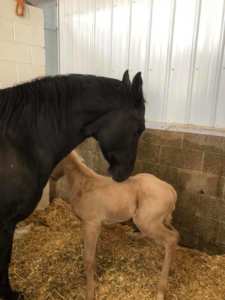 Welcome to the world! 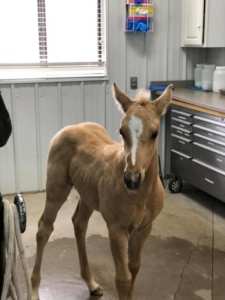 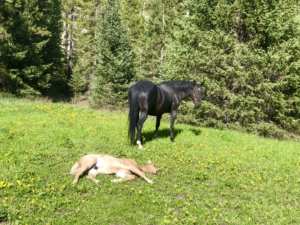