What She Did to My Horse is Unbelievable!

As you are aware by now I am particular to horses and you could say a little obsessed at times, but I have my reasons! Deuce and his best friend Felix were the kind of horses that you spent years trying to find and sometimes you never did. The horse we wished we had forty of. The one the kids could climb under and all over. Where you could give him a year off and go grab him out of pasture and he was the same horse he was at the end of a long season at the ranch. He was honest, sure footed, broke, and reliable.  Kids and adults could both ride him but he was especially partial to the ladies….especially one lady. 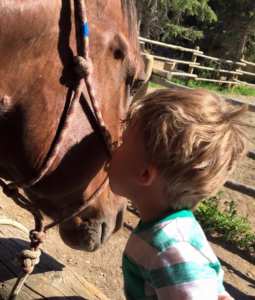 Deuce is the kind of horse that you can see and feel everything when you look into his eyes. His eyes are sincere and deep, I always referred to them as ‘Grandpa Eyes.’ They were what the horse world refers to as kind and when we lost his best friend, Felix those eyes changed and it seemed like Deuce just couldn’t get a break. 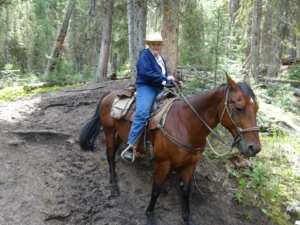 Last spring we went out of town for a family trip and Will (the previous owner) said he would run up and check on horses at our new pasture. That is when we got the phone call that changed everything….

I could see Kurt’s facial expression and I remember the whole room going silent. Kurt got off the phone and said it is one of our horses. He said, “I am not sure which one, Will said it was a bay” and unfortunately Will didn’t have the ability to get him out of the backcountry but knew he wouldn’t make it through the night. So we called Keaton who came to Deuce’s rescue.

When he arrived, he found Deuce off by himself. It looked like you sliced his fetlock off, the swelling was horrific and you can tell he had lost all his energy. Some way somehow Keaton was able to get Deuce on the trailer that night and take him to Hardaway Clinic. 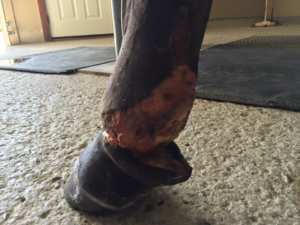 The next morning Kurt and I arrived at the clinic first thing to find our horse in pretty rough shape. It turns out Deuce had fallen through an old box car that was converted into a bridge. Dr. Hardaway explained the risks, the severity of the injury and we talked about quality of life for Deuce. Deuce was getting up in age, but we saw the look in his eyes. He wasn’t ready to give up. So, Kurt and I made the choice that so many people frowned on us for making. We brought him home. 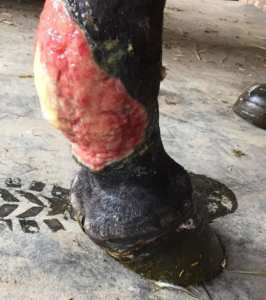 Over the next two months Deuce was in a stall. We would change his leg every four days and rewrap it. It was slowly healing but because it was in a high motion area we knew it would take at least six months if ever to heal.

You know that lady that changes the mood of everything when she enters a room? The lady that is full of joy and her smile is infectious? The one that you wish could be there on every bad day? 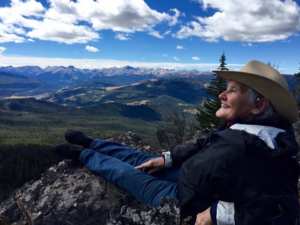 Ya I know one too, her given name is Mary but we call her Bling-Bling because if you ever see her coming you will understand why. She is known for her silver, her turquoise and her love to wear as much of it as humanly possible. She has the best sense of humor, love for life and loves to flirt with the boys….who of course dote over her. 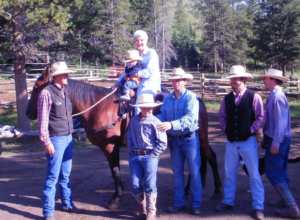 Mary had been coming to the ranch long before I had, but that didn’t matter to her she took me in and loved me as if she had known me my whole life. When we found out we were pregnant you can believe she was over the top and quickly her name changed to Grandma Bling Bling.

As most of you know when you arrive at the Covered Wagon you are matched with a horse. Most of the time that is your horse for the week, in Mary’s case that was her horse for 11+ years. Mary was matched with Deuce and the love for one another began. Every year Mary had to her ride her boy and as hard as it is to always let the guests ride the horse they request (especially such a popular horse) Mary was different, they had a bond that I’ll admit I really didn’t see or get until last summer. Mary loved and loved and loved on Deuce and some times that is as far as they would get. I can see it like it was yesterday her telling me “I am going to just hang at the ranch and love on Deuce” and she would laugh and put her hand on my shoulder.

I truly believe Deuce looked forward to Mary’s visit and the attention she gave him and last summer was no different. Grandma Bling Bling arrived at the ranch, but this time with a hurt horse and not any hurt horse, her Deuce. I cannot even imagine what Mary was feeling, but I do know her love for that horse was not going to change. She immediately headed to the corrals to see her boy and there he was in the stall.

Over the last couple of weeks Deuce had been laying down in his stall a lot. He wasn’t eating much and his weight was dropping off. Every morning at breakfast while Kurt would be putting together rides Mary already knew what she would be doing, spending the day with her Deuce. I can’t remember if Kurt shared with Mary that we would be putting Deuce down after she left or if he kept that quiet, either way it didn’t matter.

Mary was determined to spend as much time with him as she could. Mary did end up going out on a couple rides on another horse and even though he was sweet and took good care of her he wasn’t Deuce. She knew that Deuce needed her.

Mary left Sunday morning and he was scheduled to be put down on Tuesday, but little did we know he wouldn’t be. Sunday after Mary left Deuce started walking better, he quite laying down as much and he started to gain weight and eat his grain again. I don’t know what Mary did to my horse, but I do know she saved him. 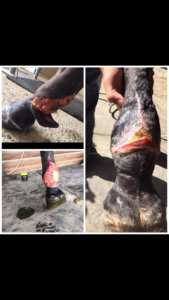 Over the next two months Deuce started to heal and was able to be put out in a run by himself. He was walking good and it was only a matter of time before he was back to his old self. 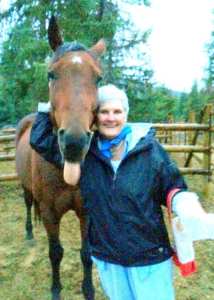 Mary returned for her second visit to the ranch that fall, this time to a whole different horse. That week was similar in that Mary spent most days at the barn visiting Deuce, but it was also emotional because she knew that Deuce would be leaving the Covered Wagon. I had made a phone call in August, to Deb and Boyd in North Dakota that just happens to be a guest at the ranch too. We retire a lot of our horses to their Family Farm and I asked if they could take three more, Deuce being one of them and she agreed. So I know you are thinking he is healing why are you retiring him? Because he deserved it. That year was hard on Deuce he lost his best friend and went through a horrific injury.

On Sunday after Mary left I loaded three of my friends on the retirement trailer and wished them a happy retirement. I cried a lot that morning and most of the day. I knew the horse that had a horrific injury and had all odds against him, the horse that’s life was saved because of one lady expressed her love, the horse that showed me how tough horses really are, who’s eyes are so sincere deep and loving. That horse survived, he made it. I will miss seeing him in pasture, guests will miss him at the ranch  but I know he will enjoy every minute of Retirement! 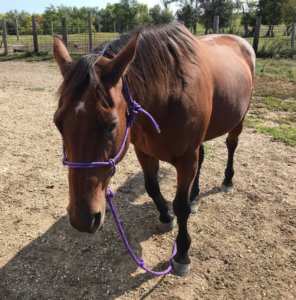 Today, Deuce is reunited with over ten of his friends from the Covered Wagon. He is loving retirement in North Dakota and is 100% healed and running the pasture like nothing happened. He is happy again and the happiness in his eyes have returned because of one lady, one special lady that just so happens to be celebrating her 80th Birthday next week. So, if you like this story please share it with your friends and let’s try and get 80 shares and 80 likes for one extremely special lady who saved one extremely special horse, Deuce. 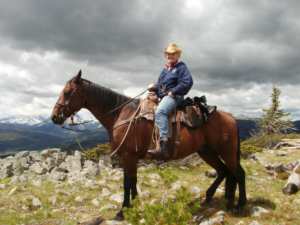